You are here: Home / B.Sc. / Gradient of a scalar field and its physical significance

In this article learn about what is Gradient of a scalar field and its physical significance. We have also written an article on scalar and vector fields which is the topic you must learn before doing this topic.

The gradient of a scalar field

Suppose we have two points P and Q separated by a small interval $\Delta \vec r$ as shown below in the figure. 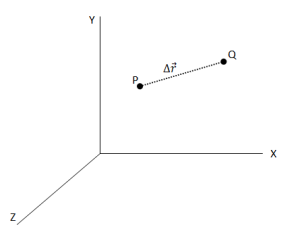 By a theorem of partial derivatives, the difference in values of T at two neighboring points can be written as

Above equation (1) tells us how temperature T of metal bar changes when all three co-ordinates changes by infinitesimal amount ${\Delta x}$, ${\Delta y}$ and ${\Delta z}$.

is known as the gradient of $T$. Clearly $\nabla T $ is a vector quantity derived from the scalar field. So, equation (2) tells us that the difference in temperature between two neighboring points is the dot product of the gradient of T and the vector displacement between points.

Since gradient of any scalar field is a vector it like other vectors have magnitude as well as direction. Rewriting the dot product in equation (2) we have,

So if we move along the same direction as the gradient then function T changes maximally. So the direction of $\nabla T$ is along with the greatest increase of T. The magnitude $|\nabla T |$ gives the slope along this direction as can be seen that each component of $\nabla T$ clearly gives a slope.

Consider the expression 3 from the previous section which is

So, this is a vector operator and as such it does not have a meaning until it is made to operate on a function. We have already seen what happens when this operator acts on a scalar function say $\Phi \left( {x,y,z} \right)$ then

and it gives a gradient of this scalar function.

This  operator acts on a vector function in two possible ways

Note to our visitors:-
Thanks for visiting our website.
DISCLOSURE: THIS PAGE MAY CONTAIN AFFILIATE LINKS, MEANING I GET A COMMISSION IF YOU DECIDE TO MAKE A PURCHASE THROUGH MY LINKS, AT NO COST TO YOU. PLEASE READ MY DISCLOSURE FOR MORE INFO.