Acceleration is the rate of change of velocity with time. It is a measure of the change in the velocity of an object per unit time and mathematically acceleration formula  is given as

which is the change in velocity of the object with the passage of time.

If the velocity of an object changes from an initial value u to the final value v in time t, the acceleration a is given by,
a=(v-u)/t
and this kind of motion is called accelerated motion.

2) SI unit of acceleration is ms-2

3) A body has uniform acceleration if it travels in a straight line and its velocity increases by an equal amount in equal intervals of time for example freely falling bodies, the motion of the ball rolling down the inclined plane etc.

4) A body has non-uniform acceleration if its velocity increases or decreases by the unequal amount in equal intervals of time.

Initial velocity= 36 km/hr=10 m/s
Final Velocity = 54 km/hr=15 m/s
Average acceleration= (15-10)/10= .5 m/s2
Example -2
True and False Statement
a) Acceleration is a scalar quantity?
b) if the velocity of the object is zero, then acceleration will always be zero
c) If a car is moving fast, does it always have acceleration?
Solution
a) False. Acceleration is vector quantity
b) False.
c) False. Fast does not mean acceleration always. It may be moving with high velocity but velocity may not be changing

The instantaneous acceleration at any instant is the slope of v-t graph at that instant. 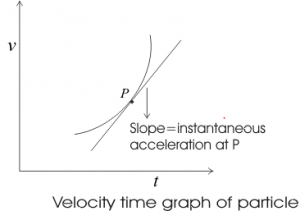 Above figure shows instantaneous acceleration at point P is equal to the slope of the tangent at this point P.

Example
A train is moving on the rail track. The distance traveled by it is defined by the following equation:
x = t3 + t + 4
Find the instantaneous acceleration at time t = 1 sec?
Solution

Here I tried to sum up the steps to solve problems involving time-dependent acceleration. We can easily calculate the position of the particle/object

If a car has a constant acceleration of 4 m/s2, starting from rest, how fast is it traveling after 5 seconds?

Question 12
A boy on a bicycle increases his velocity from 5 m/s to 20 m/s in 10 seconds.
a) What is the acceleration of the bicycle?
b) What distance was covered by the bicycle during the 10 seconds?

when a particle moves along a circular path it must have components of acceleration perpendicular to the path when its speed is constant. Such type of circular motion is called Uniform circular motion

The magnitude of the instantaneous normal acceleration is equal to the square of the speed divided by the radius. Its direction is perpendicular to velocity vector and acts along an inward direction along the radius of the circular path towards the center of the circle.

Because of this, it is called central or centripetal acceleration. The term centripetal means seeking the center.

Check out below article to get more information on it

Acceleration in a curvilinear motion

Hope you like the detailed explanation with examples for acceleration formula. Download of whole article is also given below

Dimensional Formula of Density In this article, we will find the dimension of densityDimensional formula for density is$[M^1 L^{-3}]$WhereM -> MassL -> Length We would…

Answer the question in this post to test your concepts for competitive exams.

In this article, we will discuss what a change in velocity is and its formula along with some examples and related questions and answers. It…

TL;DRThe escape velocity formula does not depend on the escaping object’s properties. The only thing that counts is the celestial body’s mass and radius. It…